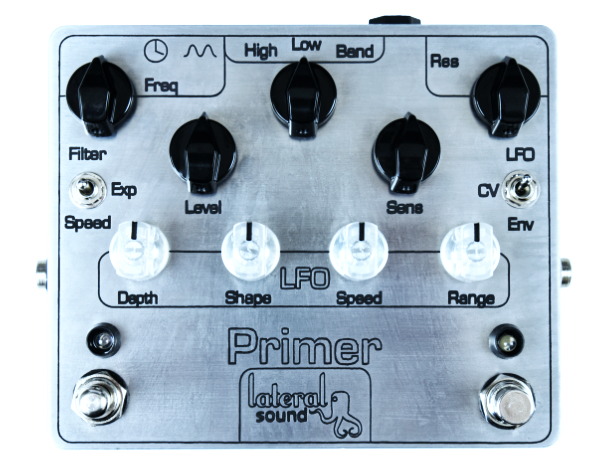 Meet the second incarnation of our Primer filter unit: We’ve kept the 3 filter types and the smooth envelope follower of the original but overhauled the rest to give you a broad spectrum of wobbles, wubs, squelches and vowel-ey articulation. Regardless of whether you’ve got your hands full of guitar/bass or you’re more of a hands-on desktop warrior, there’s loads of ways to interact with this character and sculpt your sound.

Following requests from a few custom builds of the original Primer, there’s now the option to plug an expression pedal in and control it like a traditional wah pedal. Except of course you’ve got the option of High-Pass and Low-Pass (think analogue synth territory) options as well as the traditional Band-Pass wah-wah option.

Firstly there’s the ‘ENV’ or envelope setting. It detects how hard you’re picking your strings and moves the filter point accordingly, like moving the treadle on your wah. With the Resonance control most of the way down, Primer does an awfully good impression of a wah pedal, only you’re not having to think about moving your foot. Turn up the Resonance and we start to leave the familiar and move into more dramatic territory, it gets all ‘synthey’.

The oscillator in the original Primer was always fine - it wobbled the filter for you smoothly and that was fun. The new LFO engine is a huge step forward though, sporting 8 different wave shapes and a much broader range of speed options, it really transforms how you can use the pedal.

There’s been more thought given to controlling the speed too - now you’re not just restricted to a single knob to set how fast it moves - you’ve got a tap-tempo footswitch and external pulse input options (easily sync it to your hardware or DAW). You can even use an expression pedal to control LFO speed.

Finally, there’s also a CV-input option that’s mapped to the filter cutoff - you can patch it into your modular system (or any other control voltage source) and have that take over from the internal LFO and envelope follower circuits.

There’s a video down below so you can check out everything it does. If you choose to watch it on YouTube there are time stamps so you can jump straight to the guitar/bass/synth sections.

Like more or less all things Lateral, you’ll be wanting a 9V DC power supply for this feller, batteries are not an option here. Plus batteries are nasty.